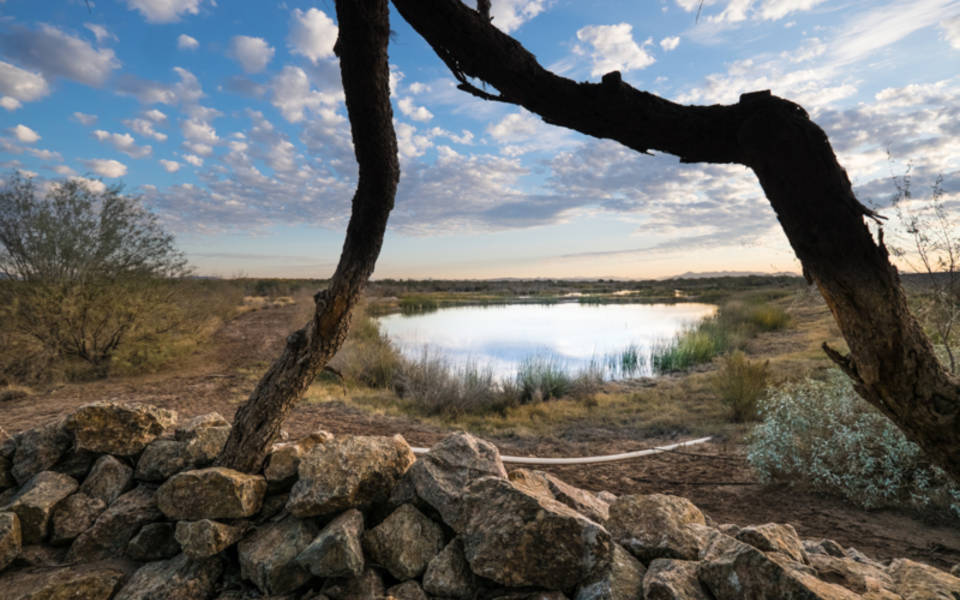 Details Likes
Just steps from downtown, you can explore the Yuma East Wetlands, where nearly 500 acres of what was a trash-strewn jungle of non-native vegetation has been transformed into a beautiful wetlands area. Just past the Ocean-to-Ocean Bridge, take an unpaved trail about ½ mile to a raised overlook, or circle the East Wetlands on a three-mile loop.  For a bird’s-eye wetlands view, stick to the paved path along the levee.
Park and walk from Gateway Park (upstream, under the Ocean-to-Ocean Bridge); from Riverside Park, located just below Yuma Territorial Prison, off Prison Hill Road; or from the south Levee Road at Avenue 2E (Pacific Avenue).
The East Wetlands also extends along the north side of the river, access from the Quechan Tribe's Sunrise Point Park, below St. Thomas Mission off the north Levee Road.

Please note, this is a natural habitat area, not an improved park. There are no paved paths, restrooms, drinking fountains or other  facilities except a few benches. Use restrooms in Riverside or Gateway Parks. Bring water for everyone in your group - even during the winter, you can become dehydrated.
Fishermen, kayakers, canoeists and paddleboarders can use the South Channel for recreation, but bring a buddy just in case - there are no patrols or rangers.
Yuma’s environmental restoration efforts since 2002 have been no small undertaking: workers have planted more than 200,000 trees, plant and shrubs and moved more than 330,000 cubic yards of dirt to create two miles of channel and lakes in the once water-starved East Wetlands.
As the tangle of invasive vegetation has been replaced with native trees and water quality has improved, wildlife has voted with its wings:  The bird population has doubled and species diversity has increased by 75 percent. In addition, endangered Yuma clapper rails are now mating and nesting in the East Wetlands. Eventually, the various restoration areas are expected to provide habitat for more than 330 species of birds and wildlife.
Ready to learn more? Exhibits at the Quartermaster Depot explain more about Yuma’s environmental efforts, as well as the past, present and future of the Colorado River.